• Knows that energy can have many forms and be converted from one form to another.

• Can explain how the principle of conservation of energy applies in real world scenarios involving energy transfer.

• Knows that the conversion of energy from one form to another generally involves the dispersion of some of that energy as heat.

As a warm-up and to assess prior knowledge, hand out 4 x 6 index cards, one per student, and ask students to each describe, in writing or as a diagram or drawing, an example of “energy,” taking no more than 5 minutes to do so. Then ask each student to succinctly present his or her answer to the class and to give you the index card. Place each card into one of two categories (by taping them on the board, tacking them on a bulletin board, or
simply putting them in one of two stacks on a table). The categories should be clearly labeled as “A” and “B.” As you do so, announce each time “Let’s put this one in group A” or “Let’s put this one in group B.”

Your criterion for classifying the cards is whether or not the form of energy described is kinetic or potential—that is, whether it is an example involving motion (such as a train, or electricity, or radiation) or of stored energy (such as some kind of fuel, or a battery, or an object that has been elevated in a gravitational field). Do not, however, explain this classification criterion to students; instead, ask them to see if they can work out (silently)
what the examples in group A have in common.

If you are given an “example” which doesn’t actually exemplify energy, ask the student to explain how it is an example of energy, and help him or her to clarify or modify the description or diagram in some way so that it becomes an example.

Once all cards are collected and sorted, ask students to work in teams (2-4 students each) to generate an explanation of the classification system. Discuss responses and guide this discussion to a review (or introduction) of the concepts of “potential” and “kinetic” energy.

Tell students that you are going to show them a short video that relates to what you’ve been talking about, and that as they watch the video they should be looking for answers to this question (the question should be posted):

“What forms of energy are shown or brought to mind by the video?”

It is recommended that students watch the video twice—once straight through so that they get a good understanding of the big picture, then again, pausing at appropriate points and listing the forms of energy observed up to that point (you may choose to generate this list as a class or to ask students to generate their own lists individually).

These are recommended “pause” points:

• Just after Emily Hardy draws the analogy between wind turbines and electric fans.

• Just after the statement that a 1.5 megawatt wind turbine can produce enough electricity for about 750 homes. (Ask students to think of the forms of energy to which household electricity can be converted.)

• At the end. (Ask students to think of forms of energy shown in the video that were not directly related to production of energy by the wind turbines.)

As each form of energy is listed, indicate (or ask students to indicate) whether it is potential or kinetic.

(Note that students may notice forms of energy which are not directly related to the production of electricity by the wind turbines, such as sunlight, the motion of the people, room lights or the lights of the computer displays–all forms of kinetic energy–or the increasing potential energy of the wind turbine blade as it is raised into the air. Such answers should be accepted.)

Distribute the handout “Energy from Thin Air?” to students working individually or in teams of two. You may wish to review the concept of efficiency before students begin the task. Answers:

3. When 50% of energy is “lost” at each conversion, it doesn’t disappear—according to the principle of conservation of energy it must go somewhere. You may wish to discuss in the context (or ask students to investigate) the tendency of energy to become randomized as heat, which is why no energy conversion process is 100% efficient.

Additionally, the energy that the wind contains must come from somewhere. You may wish to discuss in this context, or ask students to investigate, the fact that the energy of the wind arises from the heating of the earth’s atmosphere by the sun.

As a follow-up or an alternative to the above lesson plan, you may wish to ask students to research one or more of these questions:

• What is the relationship between the speed of the wind and the rate of energy production (that is, the power) of a wind turbine? How is this relationship explained?

• What is the relationship between the size of a wind turbine’s blades and the amount of power produced at a given speed of wind? How is this relationship explained?

• How is the rotating motion of a wind turbine’s blades converted to electricity (that is, how does a generator work)?

This diagram shows the transfer of energy that occurs when electricity is produced by a wind turbine and used to charge the batteries of an electric car: 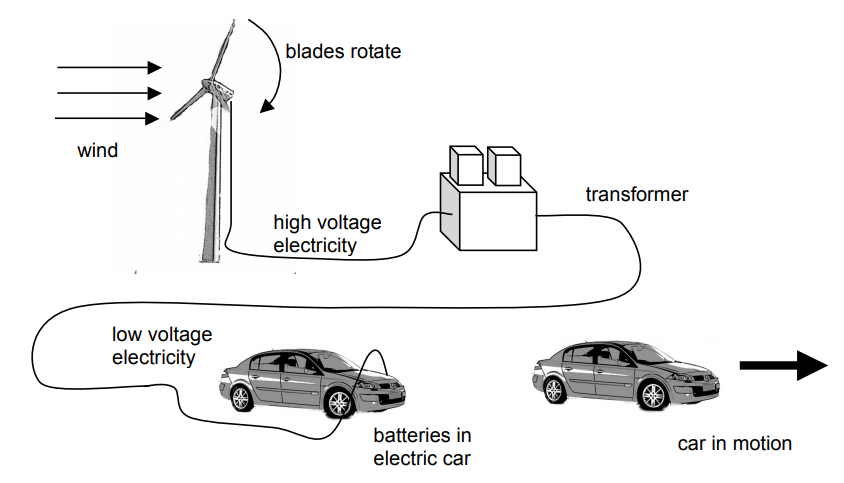 1. For each form of energy in the diagram, label it as “K” for kinetic or “P” for potential.

2. Suppose the efficiency of conversion for each change of form of energy is 50%. If the wind carries 1,000 units of energy, how many units will be transferred into the motion of the car?

3. According to the principle of conservation of energy, this diagram is incomplete. What else should be shown?