• Can use the problem-solving strategy, “Draw a picture or diagram.”

Arrange the students in teams of two or three members, and distribute the handouts. Ask the teams to read the handout and talk it over for a few minutes. Then, as a class, discuss the problem, so that it is clear to everyone what they are being asked to do.

Tell the teams that their first task is to draw a diagram that represents how cell phones are recycled. (Alternatively, you may wish to generate the diagram as a class activity.) Here is one such diagram: 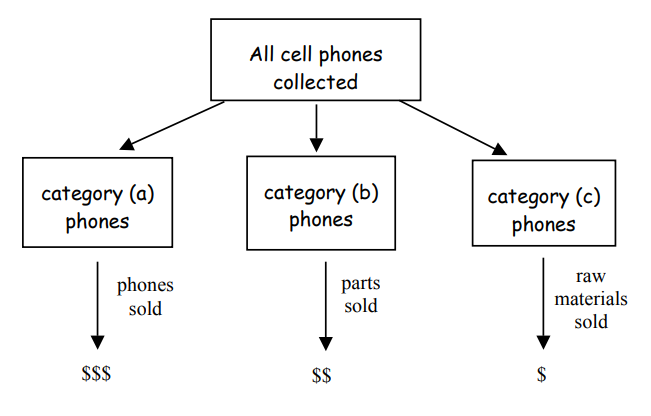 If you do have teams create diagrams individually rather than as a class activity, discuss the results and generate a single diagram that the class agrees is a good representation.

With all teams using the same diagram, ask them now to add numbers to represent the mathematical information that is given. Again, this may be done as a class activity, or done first in teams and then summarized as a class discussion. The results should look something like this: 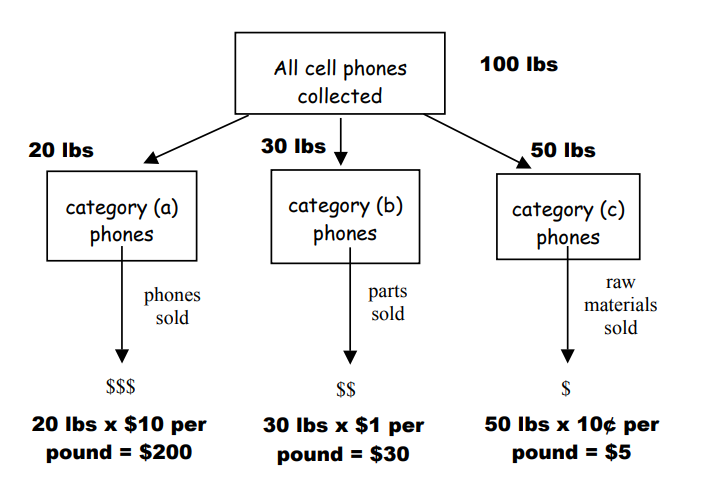 Next, ask students a question such as this: “The information in our diagram represents what happens with 100 pounds of cell phones. But how do we determine how much money we could make with 2,500 pounds of phones?” 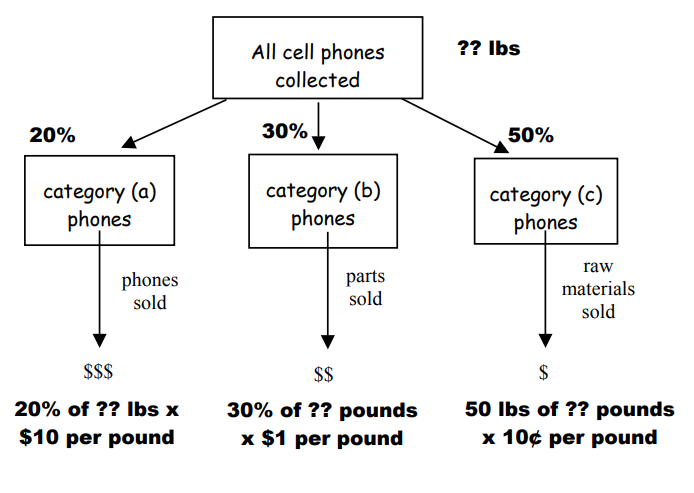 Have students work in teams to answer the question posed, based on the final diagram.

Circulate as they do so, and ask questions to ensure that members of each team understand how the concept of percent relates to this situation, and to help individual students carry out the computations as needed.

Suppose that your school wants to raise money to build a new computer lab, and you have the idea of collecting old cell phones and recycling them. Since it was your idea, the Student Council asks you to find out how much money you can make that way. Here’s what you find out:

1) Old cell phones can be recycled in three ways:

a. Some cell phones, if they still work, can be sold for re-use.

b. With other cell phones, the phones can be taken apart and their parts can be sold.

c. With phones that are older or broken, the parts of the cell phones can be crushed and melted into metals and plastic that can be used to make new cell phones or other things.

3) The cell phones in category (a) can be sold to a distributor for about $10 a pound.

4) The cell phones parts in category (b) can be sold to manufacturers for about $1 a pound.

5) The cell phones in category (c) can be sold to raw materials processors for about 10 cents a pound.

Based on this information, if you collected 2,500 pounds worth of cell phones, about how much money would expect to make?