· Can plot a point in a two-dimensional coordinate system, given the coordinates, or determine the coordinates of a given point
· Can relate aspects of a graphical model to the real world situation which is being modeled
· Understands that linear functions are characterized by the fact that the ratio of change in independent variable to change in dependent variable is constant
· Can determine the equation of a linear function that closely matches a set of points (optional)

Procedure: The activity is best done in teams of two to four students.

The activity provides an opportunity to explore the behavior of a linear and non-linear function.

Arrange the class in teams and, as the first task, have each team read the memo from Robert Mesta and discuss it amongst themselves to ensure they understand it. As this is occurring, circulate and help as needed. Then discuss the memo as a class and make sure all students understand what is being asked for. In particular you will want to discuss several examples of “productivity” to be sure that the concept is understood.

Next, have each team work out answers to the questions presented in the memo. Each team should prepare a written report on their results.

As a wrap-up, have each team present its answers to one of more of the questions asked, and discuss as a class. Guide students to the realization that the straight-line nature of the first graph is a consequence of the fact that the amount of change in the dependent variable is the same each year.

1. Productivity needs to increase by 0.12 per year. 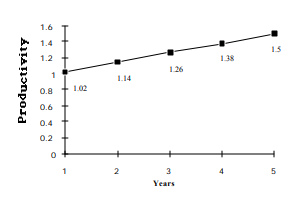 There are several possible approaches:

To get an answer closer to 1.5 would require choosing a percentage such as 110.7%. 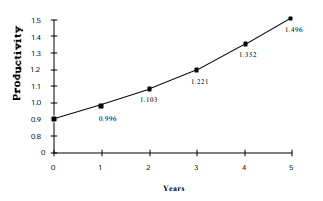 5. Accept any graph that is initially steep and then levels off, such as the one below 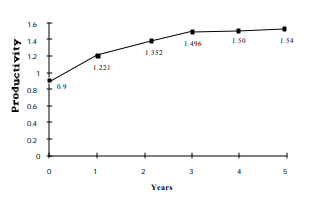 I am currently working on a recovery plan for a bald eagle population in the Northwest. I need your help in developing the best plan.

We have decided to set the following long-range goal: increase productivity from 0.9 to 1.5 over the next 5 years. We are more likely to reach our 5-year goal if we set annual targets as well, so we need to determine what those annual targets will be.

There are several ways to approach this problem. Your answers to the following questions will help me choose an option.

1. Suppose that productivity increased by the same amount each year. Draw a graph that shows what the productivity would be after one year, two years, three years, four years, and five years.

2. Suppose that productivity increased by the same percentage each year. First, please work out what would happen if the percentage increased at a rate of 110% each year.

3. An increase of 110% each year does not achieve our goal of 1.5 by the end of the fifth year. What annual percentage increase would reach that goal? Make a graph based on your calculations.

4. Compare the graphs you made for questions 1 and 3.

5. Realistically, productivity will probably increase most in the first few years right after we introduce the recovery plan. In later years, increases in productivity will be smaller and may even level off. Draw a graph of
productivity over five years that shows that type of situation.