· Can translate a mathematical relationship described in words into an expression, equation or inequality

-10 small discs (roughly 1” in diameter)
-2 other objects which are identical to each other but different from and somewhat larger than the discs (these objects could be wooden blocks, plastic construction bricks, or geometric shapes cut from construction  paper or cardboard)

Procedure:
1. Before class, write the number “3” large on the blackboard and cover it.

2. Tell students that they are going to learn some of the “magic” of algebra. Ask each student to think of a number, write it down, and enter it into their calculator. Tell them not to let anyone else see what’s on their calculator, especially you. (If calculators aren’t available, have students do the following operations on paper.)

3. Then have them a) add 5 to their number, b) multiply the result by 2, c) subtract 4 from that result, d) divide the answer by two, and e) subtract the original number. Remind them not to show the answer to anyone.

4. Tell the students that you are going to use the magic of algebra to make the answer jump from their calculators to the blackboard behind you. Then reveal the “3” on the board.

5. Ask the class, “Does anyone know how I did that?” and allow a few minutes of discussion on their ideas and explanations. Then say, “Remember I told you this was the magic of algebra. Can anyone tell me how algebra is different from arithmetic?” Guide the class to the understanding that the difference is that in algebra, letters are used to represent numbers. Discuss also the similarities between algebra and arithmetic (both do use numbers, both have the operations of addition, subtraction, multiplication, and division, both involve equations, both are used to solve problems).

Now tell the class you are going to do an activity that shows how algebra works.

1. Have each student think of a number, and then take one of the two larger objects out of his plastic bag and put it on the table in front of him to stand for that number.

2. Tell them to take five discs out of the bag and put them with the larger object. Tell them each disc stands for “one.” Ask what they now have in front of them (“my number plus 5”).

3. Tell them to multiply the amount in front of them by 2. Observe as they do this; they should take the other large object and the other 5 discs out of their bag and place those in front of them on the table, so that they have twice as many objects as they had before.

4. Ask them what they have now, and have one or more students explain what the objects in front of them represent (“two of my number, plus 10”).

5. Tell them to subtract 4 from the amount they have. Ask them what amount they now have in front of them (“twice my original number, plus 6”).

6. Tell them to divide that amount by two. Remind them (through discussion) that they can physically divide the amount into two equal piles and keep just one of the piles. This leaves one large object plus three discs on the table in front of them. Have students explain what this represents and why that is the result of dividing by two.

7. Say, “Here’s the last step. Subtract your original number from the amount on the table.”

Have them do this and explain what the result is, and why.

Tell the class they are going to do the same thing again, but using letters.

2. “Think of a number and take out the larger object to represent it. What letter do you want to use to stand for that number?” (Students don’t all have to have the same letter.) “Write that letter down on a sheet of paper.”

6. “Show what happens when you divide by two.” (Students separate objects on table into two piles, each with one large object and three discs, and put one of the piles back in the bag.) “Write down what you now have.” (N + 3)

7. “Show what happens when you subtract your starting number.” (Students take large object and put it in bag). “Write down what you now have.” (3)

8. “Remember the letter you chose to stand for your number? Does anyone know what we call that letter, in algebra?” Ensure the class understands it’s called a variable, and that a variable is a symbol used to represent an amount when you don’t know what the amount is, or when the amount isn’t always the same (point out that several students were using the same variable to represent their own starting numbers, which were all different).

Complete the lesson by reviewing the words arithmetic (“adding, subtracting, multiplying and dividing numbers”), operations (“things you can do with numbers, like addition, subtraction, multiplication, and division’\”), variable (“a symbol like a letter that stands for an amount that you don’t know or that isn’t always the same”), and algebra (“doing operations with variables”).

Note: If you have more time, you can have the class work (individually or in teams) to make up their own algebra magic tricks. Be sure that they test each “trick” to see if it works, and encourage them to use objects to demonstrate it. This can also be given as a homework assignment. 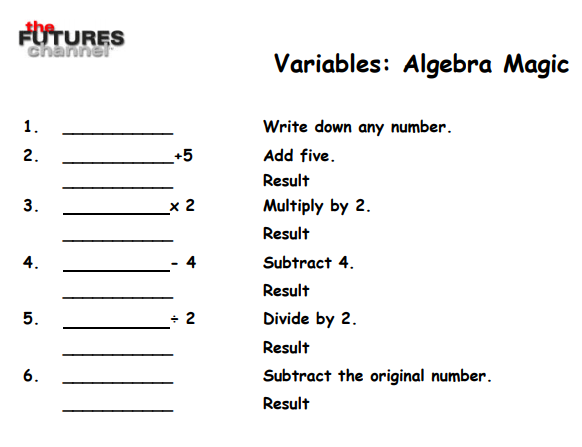